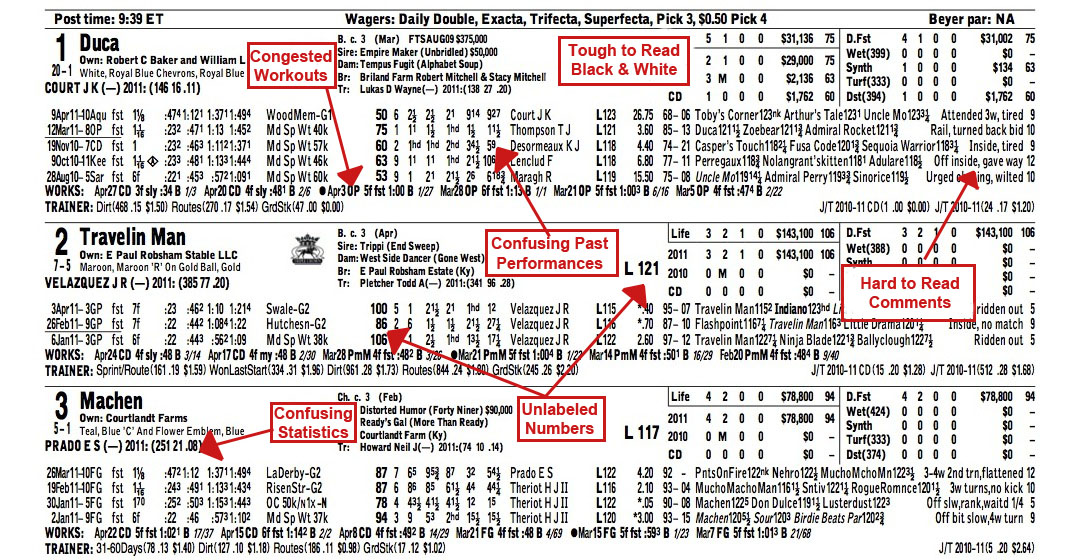 Experienced bettors believe that a horse’s past performance indicates how it will perform in a race. By scanning a horse’s previous race results, you might be able to pick a winner too.

However, because it’s not an exact science, no horse is a sure bet. Especially if you’re just starting out. Handicapping is both an art and a science that takes years to master. As well as a little luck. Thankfully, each track has several professional handicappers who publish their favorite picks for each race.

Horses don’t run their best if they’re not in top shape. Look for recent run dates or morning workouts. Conversely a layoff may provide time for rest, recovery, and training that allows a horse to move up in performance.

What class of competitors has the horse raced against in the past? If it barely competed against weaker competition, it may not be able to keep up in a higher class.

Most horses run well under a mile or over a mile, but not at both. Consider a horse if it has run well at the distance before the current race.

Outside post positions (10 and up) sometimes make it a little harder for a horse to win.

A horse is either a pace-setter (out in front), a stalker (in the middle), or a closer (comes from behind). A race with only a few pace-setters makes one of them an attractive pick. Choose a stalker if there are too many pace-setters and no closers. If there are a lot of pace-setters, they might spend all their energy trying to outrace each other. This makes a stalker a good, though still risky, bet.

Pay attention to the trainer. A good trainer might be able to give even a mediocre horse a slight advantage. Can anyone say, horse whisperer?

Better riders are at the top of the leaderboards for a reason. They know magic. Okay, maybe not. But don’t underestimate the importance of the skill of who’s in the saddle.

Horses tend to enter a period of peak performance, then gradually fade. If a horse’s recent races show a decline in performance, it may no longer be at its peak.

When good recent history complements consistency, you’ve got a quality pick. Make sure a horse’s last win wasn’t a fluke. Every once in a while, a Hail Mary pass works in football. The same fluke can happen with a run on the track.

Even handicappers argue amongst themselves whether or not 10 lbs makes a difference on a horse weighing more than 1000 lbs. If you believe it does, it’ll be more of a factor in longer races.

A horse’s past performance can be reduced to speed figures. Variables such as running times and track conditions determine these numbers. They can be helpful, but only when used with other factors.

Even handicappers argue amongst themselves whether or not 10 lbs makes a difference on a horse weighing more than 1000 lbs. If you believe it does, it’ll be more of a factor in longer races.

This site uses functional cookies and external scripts to improve your experience.

NOTE: These settings will only apply to the browser and device you are currently using.

Essential cookies for the site to function as intended.